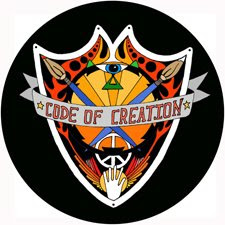 Whistler, February 10, 2009 - Code of Creation kingpins, Daniel Poisson and Corinna Haight, have been commissioned by the RMOW (Resort Municipality of Whistler) and the Public Art Committee to produce a gigantic, super funky 65' x 6', two piece mural on the Blackcomb Way Bridge underpass in Whistler, BC, Canada. Whistler is a mountain biking, winter sports and outdoor enthusiasts mecca, North America's #1 ski resort and mountain host to the 2010 Winter Olympics. Recent travel abroad and life in Whistler gives Daniel and Corinna the unique vision for this new and necessary mural project titled: "FULL CIRCLE", to be completed April 24 to June 24, 2009.

Sure to captivate the viewer and leave a positive, lasting impression in the minds of the observer, the "Full Circle" mural will incorporate vivid elements of nature from the highest peaks to the deepest oceans. Imagine being perched atop a snow-covered rocky outcropping, basking in your glorious state of wonder and fulfillment. Set out in front, is the view out across the magnificent Whistler valley, overtop the towering vertical peaks, vast mountain ranges and luscious evergreens, beyond the tranquil, glacier-fed lakes, through the motionless rocky bluffs, across the seas shoreline into the weather-hammered, adventure-drawing seas and into the depths of the deep, dark ocean where the largest marine mammals on earth reside. This leads you back to the shoreline and into the valleys again, up to the mountains where you have begun your awe-inspiring, life changing vision; having now come: "FULL CIRCLE". Then add Daniel and Corinna's funk factor.

Corinna Haight has produced her own art and music event in Whistler, called Diversity, organizing over 30 artists and numerous bands. As well, Corinna has participated in group art shows including Artrageous along with selling and

more
displaying her work at Fitzsimmons Pub and Cafe de la Place. She took the first place prize during the Masterpiece In Motion global snowboard design competition in 2007. Recently Corinna and Daniel were commissioned for 5 months, in Panama City, Panama to produce artwork for Luna's Castle, a new, world-class hostel. She produced over 70 pieces in total, now on display.

Daniel Poisson, producing 50 pieces in Panama, also has a long track record in the arts. Having been called "Whistlers Own Picasso" leaves Daniel with the passion, drive and desire to fulfill his dream of painting...forever. His parents and teachers collected his art from the time he was born. Daniel has donated dozens of art pieces to charities as well as put private collections in place around the world. Daniel is well known in the Sea to Sky region for his large, bold live paintings at festivals such as TWSSF, Artrageous and Whistler Street Entertainment. His abstract African tribal pieces have become well recognized and collected, although his work is tremendously diverse and ever changing.

Daniel Poisson and Corinna Haight look forward to your contact regarding questions, interviews, articles or any other promotional reason. Press Packages are also available upon request.